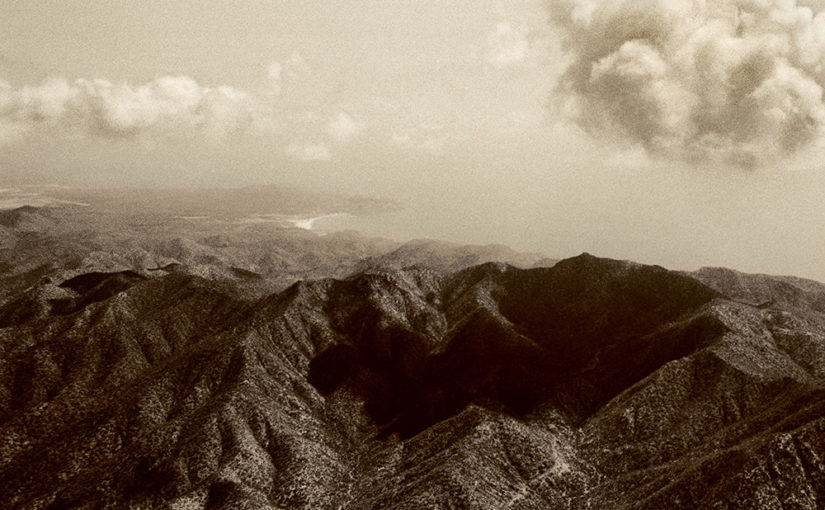 Our first scheduled exhibition of 2022 in the Atrium Gallery of the Jane Lutnick Fine Art Center is David Freese Photographs: The Geography of Climate Change. David Freese is a photographer and author of three photo books: West Coast: Bering to Baja, 2012; East Coast: Arctic to Tropic, 2016; and Mississippi River: Headwaters and Heartland to Delta and Gulf, 2020. Taken together, the volumes form a trilogy on North American waters in a time of rapid climate change. The exhibition consists of thirty-nine sharp focus black and white, and toned landscape photographs that provide an incisive view of this changing landscape through the use of new technology and an awareness of climate change.

Freese, a Philadelphia area photographer, has made highly detailed landscape photographs of the Northern Hemisphere from the Arctic to the Mississippi River to the East Coast. His approach to photographing the landscape results in images that are both new and part of a tradition, the roots of which can be traced back to the American Luminist movement and on through the nineteenth century Western exploratory photography of William Henry Jackson, Timothy O’Sullivan, Carleton Watkins, and Eadweard Muybridge. Those classic, pinpoint-sharp photographs, suffused with light, became the source material for artists, and for the lawmakers who worked to preserve and value these landscapes before and after the Civil War.

Freese’s vision, like those of his predecessors, connotes an artistic sensibility of hope and loss while inspiring awe and woe. His contemporary images offer what those captured by his nineteenth century predecessors could not—aerial vantage points that show the connectivity of ecosystems. Freese’s images are made in a manner that seeks to show vast areas of the land by utilizing aerial viewpoints—an airplane for higher altitude views and a drone to photograph at lower altitudes. The resulting photographs offer, in the former case, a wide angle view, and in the latter, a normal view scale, through which the observer can picture the connective tissue of rivers, valleys and oceans. The different vantage points gained by using an airplane and a drone offer viewers new perspectives and a different sensibility of the scale of the landscape and its fragility. His photographs of flora, fauna, wildlife, and cultural sites made at ground level, when compared to the aerial perspectives, bring the viewer into an awareness of the cumulative effect of climate change. Freese’s photographs bring us to this awareness when they are viewed collectively, as they show the retreat of glaciers, flooding along the banks of the Mississippi River, and the disappearing coastline along the Eastern seaboard of the United States.

William Earle Williams
Audrey A. and John L. Dusseau Professor in the Humanities
Curator of photography

The images are grouped in the three areas represented by the book titles of The Trilogy of North American Waters as follows:

At the foundation, I want the images to convey an ongoing wonder and surprise at the alluring beauty and diversity of the land. Many of these locations will be unknown to most viewers, yet they are all a part of North America, e.g., the Aleutian Islands and other areas of Alaska, British Columbia, Greenland, Newfoundland, Labrador, and many locations along the Mississippi River. But as we progress chronologically through the three books, environmental themes and warnings come to the fore.

With the West Coast images—using captions, text, and maps—viewers are made aware that they are looking at majestic scenery created by powerful geologic forces in the form of earthquakes and volcanoes that arise from tectonic plates crashing against each other. In fact, the West Coast is part of the Ring of Fire around the entire Pacific Ocean. On the West Coast, therein lies the danger to humankind, which is ill-prepared for the inevitable major natural disaster(s).

The East Coast images convey an entirely different danger, as more and more densely populated areas in the form of cities and towns—and the power lines that supply them— come into view. Here, on America’s geologically settled and low-lying East Coast, the greatest threat is from sea level rise. In this body of work, the aerial photographs place this vulnerable coast into an environmental context with an encroaching ocean.  The proximity of the sea to dense populations is evident and a sense of fragility is recognized.  Yet, in the book, there is only one image of actual storm damage—the roller coaster tossed into the ocean by Hurricane Sandy at Sea Isle City. Rather, it is more powerful to let the imagination do the work, as we plainly see that there is nowhere to run when the sea comes up and in.

Finally, the Mississippi River photographs contain warnings of dangers that are just as evident in the nation’s heartland. Although aerial images reveal a wondrous and ever-changing Mississippi, the lens moves closer into the towns and cities and onto the farmland, the battlefields, the barges, the towboats, and the people who work on the river and those who attempt to manage it.  In his Mississippi River book essay, Simon Winchester states that the Mississippi has become a “manufactured river,” more akin to a canal as the Army Corps of Engineers tries to keep it in place with levees, control structures, and spillways.  These herculean efforts to control the river only exacerbate the many problems which are now accelerated by warming weather, greater storms, more rainfall mixed with agricultural runoff, and, of course, increasingly frequent, widespread flooding. Beyond these immediate environmental harms, the river reveals a checkered, often tragic American history as thoroughly as any textbook. It is no wonder that irrational Human Nature and indifferent Mother Nature are very much at odds as seen throughout The Trilogy of North American Waters.