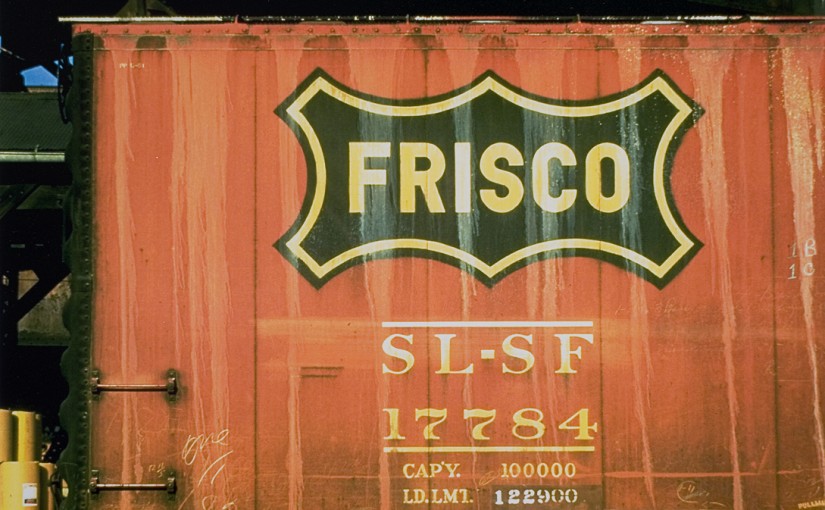 The railroad has been a subject for photographers since the early history of the medium in the mid 19th Century. The Atrium Gallery of Marshall Fine Art Center will host a show of railroad themed photographs by Walker Evans. The Alcove Gallery in Magill Library will host a group show of landscapes in which the railroad is a prominent aspect of the composition.

The Atrium Gallery show consists of 32 color photographs by Walker Evans done for Fortune Magazine in the 1950s. Evans called color photography “vulgar,” yet some of his most beautiful work is in color and the subject was the railroad. He published four photo essays on railroads for Fortune and a fifth for which he wrote the text to accompany Robert Frank’s photographs. These photographs and others commissioned for Time and Life publications are on the periphery of the critical studies and exhibitions of Evans’ six-decade career. This is largely due to the photographer’s disparaging remarks about color and emphasis on his 1930s photographs of depression era America.

Evans began to photograph the railroad beginning in the 1930s and continued for the rest of his working life. His mid-century color work seen in the context of his earlier and better-known photographs is a continuation of Evans’ interest in American vernacular material culture. This approach allows for and predicts the groundbreaking color work of William Eggleston, Stephen Shore and Joel Meyerowitz in the 1970s as well as the New Topographic Photographers working in black and white like Nick Nixon, Lewis Baltz, Bernd Becher and Hilla Becher. It also brings our understanding of Evans’ use of color as an aspect of his aesthetic full circle, presaging his later public and enthusiastic embrace of the use of the Polaroid SX-70 Camera and film to make color photographs.

The Railroad in the Landscape – The Alcove Gallery

The Alcove Gallery show consists of a group of 14 pictures that features the railroad in the landscape from the 19th Century to the present, beginning with photographs produced by master photographers whose craft was honed by using the wet plate process to record the Civil War. These same photographers were hired in the 1870s to do survey work, which included photographs commissioned by the government and later the railroads. These pictures made with large format view cameras and printed on albumin papers are some of the most important and iconic images of the Western landscape. Today these photographs are considered among the most important artistic expressions and interpretations of this landscape.

These images define to a large degree our sense of the West and American identity. The best known of these 19th Century photographers to photograph the landscape in this manner with the purpose of promoting the building of the transcontinental railroad was William Henry Jackson and A.J. Russell. This genre and subject have continued to be a theme and inspiration for contemporary photographers. More often than not the tracks and attendant equipment in contemporary work have been dismantled in effect showing the reversal of the process documented in the 19th Century photographs. Contemporary artists working in this manner include Mark Ruwedel in black and white and Scott Canarroe in color.

This series of exhibitions focused on the railroad and the landscape is both topical and timely. All of the photographs for these exhibitions with few exceptions come from Haverford College’s five thousand-piece permanent collection.