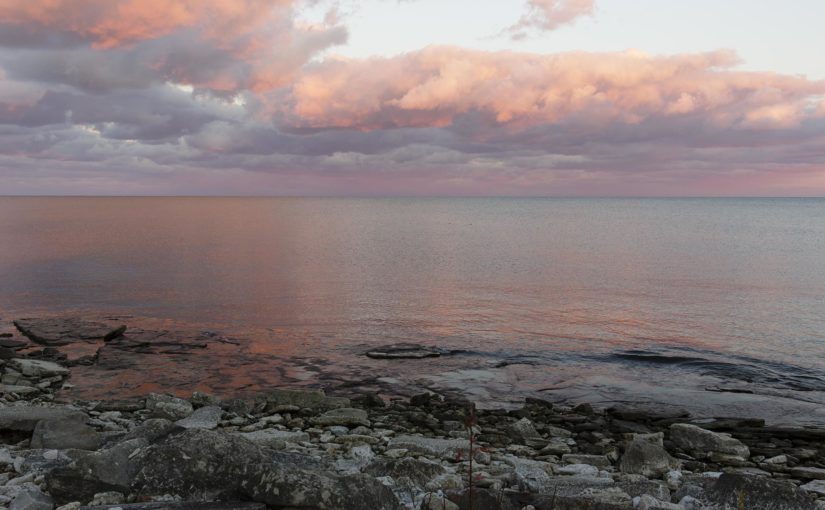 Like the Redwood Forest, the Rocky Mountains, and the “amber waves of grain” immortalized in song, the Great Lakes loom large in the American imagination. These five interconnected bodies of water on the U.S.-Canada border contain more then 20% of the earth’s freshwater and have long been the subject of work by writers and artists from Henry Wordsworth Longfellow and Joyce Carol Oates to William Henry Powell and Alexis Rockman.

Pennsylvanian photographer Theo Anderson has also found inspiration in “the nation’s fourth seacoast.” A new exhibit in Haverford College’s Atrium Gallery, Theo Anderson Photographs: The Great Lakes Landscape 2010 to 2016, gathers 30 of his large-format color-pigment photographs of the Great Lakes, part of a larger American Episodes series, as a subject commensurate with his capacity for wonder.

“The photographs are not so much about place as they are about transformation,” says Anderson. “The context of everyday American life is used in my visual exploration. Working without an itinerary, free of constraints and immersed in the moment, serendipity is my guide. The search began in the early 21st century and is expressed in a myriad of episodes that inform my life.”

Anderson’s Great Lakes landscapes are known as Gitche Gumee—both because of Gordon Lightfoot’s 1976 song, “The Wreck of Edmund Fitzgerald” (“The legend lives on from the Chippewa on down/Of the big lake they called Gitche Gumee/The Lake it is said never gives up her dead/When the skies of November turn gloomy…”) and the opening lines of the Longfellow poem “The Song of Hiawatha” (“On the shores of Gitche Gumee/Of the shining Big-Sea-Water…”). But the lakes themselves are greater than the words of any song or lines of any poem. Touching the province of Ontario and the states of Michigan, Wisconsin, Minnesota, Illinois, Indiana, Ohio, Pennsylvania and New York, more than 30 million people live in the Great Lakes basin. (That’s 10% of all U.S. residents and 30% of all Canadian residents!) The square mileage—95,160 square miles—is larger than the state of Texas.

So the artist’s landscape photographs are given a presence by their size and horizontal orientation. The viewer is invited to really take in the grand spaces, his meticulous attention to surface textures, and the qualities of light and sky that define this landscape. The photographs are made in the tradition of American Landscape Painting as much as they are in the tradition of American Color Photography established towards the end of the 20th century. They are in their own right original works of art that respond to a uniquely American place with eloquence and awe.

Anderson received an undergraduate degree in political science from Temple University, and though he began a doctorate program in government at Lehigh University, he left  to pursue a career in photography. Based in Allentown, Pa., he has photographed around the world on self-assignments and assignments for clients. His work is represented in private and public collections including the Museum of Fine Arts Houston, the Amon Carter Museum of American Art, Allentown Art Museum, Lehigh University, and Haverford College. He has published over 20 artist books, some of which are in Special Collections at the Lutnick Library Haverford College.