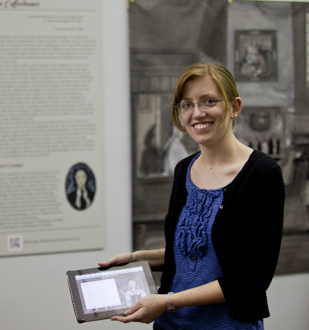 Rose developed the mobile component of the exhibit, Sarah Stout’s Interrogations. She collaborated with members of the creative team to develop a mobile responsive site that allows visitors to engage with historical characters from the Trial of Spencer Cowper. You can find more of Rose’s work here: http://www.roseabernathy.com/ 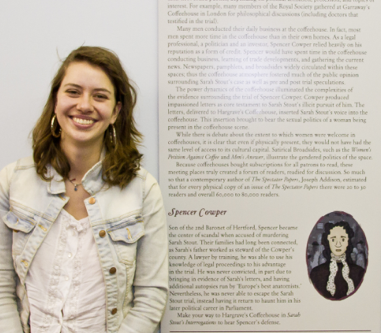 Mary Clare co-wrote the labels to introduce each section of the exhibit. The section introductions contextualize the Trial of Spencer Cowper within the political and religious tensions emerging in the late 17th century. 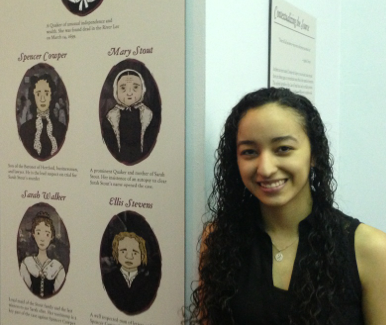 Vanessa animated the characters of the trial using the character descriptions from the game text and 17th Century etchings from Haverford’s Special Collections. She etched and hand-colored each character. You can find more of Vanessa’s work here:http://vanessahernandezart.com/

Mary Clare, Rose, and Vanessa brought an incredible range of skills and expertise to this exhibit. They have each contributed original work and research as well as helped to develop interdisciplinary partnerships.

This exhibit was able to come to fruition because of the widespread generosity of all those who gave time, expertise, and support to the exhibit. It is truly a collaborative project. In addition to the core creative team, we have drawn upon the expertise of faculty  and librarians, which has allowed a generative and exciting process and outcome.