Advertising discourses of race, class and history in popular culture

Hank Willis Thomas is an archaeologist of visual culture concerned with popular imagery and how it informs people’s perceptions of themselves and others. He draws on a vast archive of magazines, photographs and books from which he creates new objects based on original found images. His work brings history forward, framing the categories of race, class and gender as experiences conditioned by popular culture. For Thomas, history is substantive for the effects it has on human bodies and fictions about them. His goal is to subvert the common perception of “black history” as somehow separate from American history, and to reinstate it as indivisible from the totality of past social, political and economic influences that make up contemporary American culture.

Thomas’s work builds on his background in photography and media culture. He only began to conceive of himself as an artist when he attended California College of the Arts in Oakland, CA in 1998. He creates through digital montage and elision, always constructing images through acts of intentional remediation. Incorporating graphic art alongside his photography, his work provokes visual associations between the aesthetic object and everyday life. In creating these juxtapositions, Thomas combines a digital expertise with the visual sensibility of a photographer to explore consumer-directed images.

Thomas takes the viewer on a visual and conceptual exploration of the black body as spectacle and souvenir in American popular culture. Black bodies in television, film and magazines are often tokenized, embodiments of stereotypes employed not only to market a product, but also an idea about a ‘type’ of person. As French Marxist and filmmaker Guy Debord theorizes, “The spectacle is not a collection of images; it is a social relation between people that is mediated by images.” 1 He continues, “The spectacle cannot be understood as a mere visual deception produced by mass-media technologies. It is a worldview that has actually been materialized.” 2 Thomas interrogates the idea of the spectacle both by acknowledging the power of the image as it relates to the visualization (or lack thereof) of the black body and by using those images to subvert misleading narratives of race, class and gender that are embedded in history and contemporary culture. 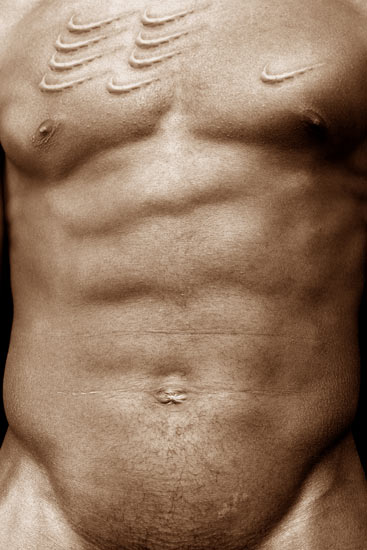 How does one responsibly represent pathological and dysfunctional images of black bodies? What happens when the visual legacy of American lynching collides with the contemporary visualization of the Slam-dunk in American sports? To this end, what is the relationship between black fieldwork in slavery and work on the field in American football? Can 21st-century images of African- American men in athletic triumph be seen as responses to 20th-century images of them as tortured bodies? Can the language of commodity culture, as expressed in advertising, reach beyond merchandise and celebrity to the legacy of racism and gender-bias in American visual culture? Thomas excavates these questions and others in his work, adding his images to the visual lexicon while challenging the way one reads them by shifting or subtracting subtle pieces of information.

Employing the ubiquitous language of advertising in B®anded, Thomas deals explicitly with race, class and history in a medium directed toward, and accessible to, mass culture. He is fascinated in particular by ad campaigns and how their logos acquire meaning that legitimates and fuels multi-billion dollar global industries. Much of the work focuses on the African-American male body represented in these advertisements. Thomas draws connections between the sources of this commercialized body and the cotton and slave trade industries that brought the United States so much wealth.

Branded Head reflects on the visual resonance between 18th and 19th -century slaves marked by owners and their 21st-century descendants who perpetuate a state of branded consciousness. Thomas’s goal is to employ critic Roland Barthes’ “what-goes-without- saying” to provoke conversations about the lingering histories that undergird our commerce-infused daily lives. 3 His work has been displayed in public kiosks and telephone booths, and on t-shirts, hats and bags—objects and places that participate in the economy of images that the work critiques.

Unbranded: Reflections in Black by Corporate America 1968–2008 uses images taken from magazine advertisements that are either marketed towards African Americans or feature black subjects. The project presents two ads for every year from 1968 through 2008, “unbranding” or removing all aspects of the advertising information, e.g. the text and logos, to reveal what’s being sold. No other part of the image has been altered or digitally manipulated, and the original photographers are largely unknown.

In these ads, markers of African-American figures from a corporate perspective, Thomas asks the viewer to look harder and think more deeply about the empire of signs that has become second nature to the experience of life in the modern world. If part of the success of advertising lies in its ability to reinforce generalizations developed around race, gender and ethnicity, myths that can be sometimes entertaining, sometimes true, and sometimes horrifying, the images themselves stand as a reflection of the way a culture views itself and its aspirations. 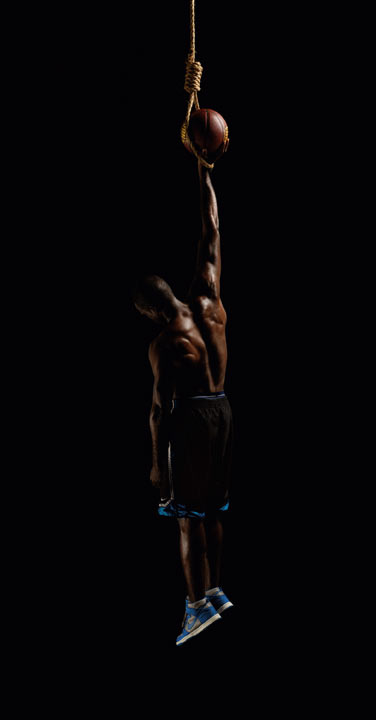 Another series of work, Strange Fruit, examines two forms of spectacle—the culture of lynching and the commodification that surrounds professional sports—and analyzes their impact on our perceptions of the black body. The series borrows its title from Strange Fruit, a song written by Abel Meeropol and recorded by Billie Holiday in 1939. Condemning the terrorist practice of lynching African Americans, it is considered one of the earliest protest songs of the Civil Rights movement. Its first stanza reads:

Southern trees bear a strange fruit,
Blood on the leaves and blood at the root,
Black body swinging in the Southern breeze,
Strange fruit hanging from the poplar trees. 4

In the photograph entitled Strange Fruit, Thomas replaces a basketball hoop with a noose, connecting the image of a soaring basketball superstar to historic renderings of lynchings— postcards of which were popular collectibles. By juxtaposing contemporary representations of athletes with historic mementos of lynching victims, the work asks viewers to consider and remember the transformation of black bodies into souvenirs and commercial objects.

Thomas has also used toys to enact his ideas about the black body as object. In 2005 he collaborated with Kambui Olujimi to produce Winter In America, a stop motion animation video that depicts the murder of Thomas’s cousin in the parking lot of a Philadelphia nightclub in 2002. The story is derived from an interview with Todd Rose, the main eyewitness to the crime, and notes taken by Leslie Willis, the victim’s mother, during the murder trial. For the piece Thomas and Olujimi use G.I. Joe action figures to replay the scene of the crime. The plastic dolls, which are surrogates for boyhood, engage in destructive behavior and gratuitous violence. A depiction of the child indoctrinated into dangerous economies of play and death, Winter In America expands on the artists’ unceasing exploration of consumerism and value. 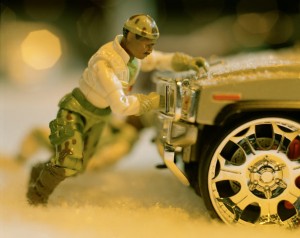 The reliance on childlike materials critiques the ways in which boys are encouraged to express their masculinity, offering the viewer a sense of this aggressive make-believe. At an early age these boys are offered miniature automobiles and simulated violence as appropriate forms of play. Young men are habituated to relate to each other as mobile, gun-toting war commandos, modeling a distorted African-American masculinity. It is not uncommon for boys to grow up believing that their respectability and success depends on wealth, power and possessions. The video serves thus as both a personal story and an ominous parable about the dire effects of marketing and valuing ‘things’ over human life.

Thomas is well aware of the power of visual culture in marketing bodies as he applies the principles of making commercial art to this study. His work offers a crucial document of the desire for the ‘good’ life and the ‘sportin’’ life that are memorialized in these images. By appropriating the visual language of advertising, Thomas both exposes and performs the implicit discourses of race, class and history that sell popular culture.