The scene is Ying Li’s office at Haverford College. Bookshelves fill a whole wall, with tomes covering everything from ancient seal carving to the most recent documenta1. After several hours, the conversation has turned to the great masters of the Yuan Dynasty. Soon I have a sticky note upon which Ying has written:

Although I’m officially here as a writer, it’s impossible to defy Ying’s enthusiasm, and we are talking shop as fellow painters. In fact, basking in Ying’s expertise, I’m reverting to a painting student. Together we admire details of a Shen Zhou handscroll from the 15th century on the website of the Metropolitan Museum of Art. Ying remarks on the varying densities of ink used to render the craggy cliffside, the Impressionist dot used to denote foliage, and the uncanny economy of, well, everything. I look and strive to learn.

To call Ying a natural teacher, although she is, isn’t quite right. She’s a natural artist and so has dug into Yuan Dynasty painting (as well as Baroque painting, Impressionism, on and on) with the determination of someone looking for solutions to a desperate problem. Desperate problems are the hallmark of a real artist’s existence. They’re not desperate in that lives are at stake; they are desperate in that they are filled with despair. The way forward is never clear and one’s powers never up to the task. To overcome this you need spirit, which Ying has in abundance. Art is an infection of feeling, said Tolstoy.2 This leaves artists who understand the problem of teaching no choice except to cough on the students, figuratively, and hope that some of them catch the germ. The craft of art can be taught, but the art of art cannot.

In front of us, Shen Zhou’s dotty scrub floats up the ancient cliffs.

The scene is Dartmouth College. It is April 2012, and Ying is the latest in a long and distinguished line of artists in residence. (Josè Clemente Orozco, Freidl Dzubas, and Donald Judd were among the early ones.) A curiously maintained tree in the courtyard of the student center has caught Ying’s attention. A variety of willow, its trunk is less than a foot thick and stands only a dozen feet, but its leaves hang on limp branches that hang around it like a billowing hoop skirt. Ying sets up her paints on a nearby walkway and paints it over the course of a month. 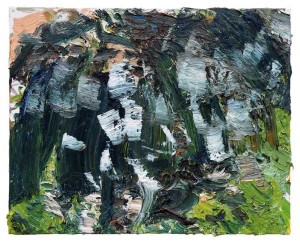 These cascading curtains of leaves break the sunlight up into the white shards that appear in Dartmouth Spring #4 (Weighty Green). A less experienced, more conventional painter might feel inclined to put those shards in the background where they ostensibly belong. But by the tactile logic of Ying’s painting, they tumble into the viewer’s eyes. (Try this on a bright day, looking at the shapes between the leaves in a porous canopy. As your vision copes with the contrast between tree and sky, you can feel those shapes in front of your face.) 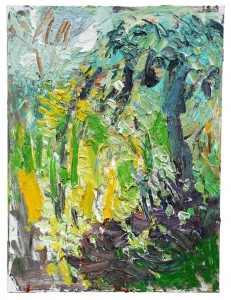 That same tactile logic turns the skirt of leaves into confidently dropping brushstrokes, each a few inches thick. In Dartmouth Spring #3 (Burst) these downward gestures had begun to assert themselves, but here they form a viridian barrier. By Dartmouth Spring #5 (Green and Purple), patches of light and patches of leaves fight for territory in the foreground. Ying, sensing impending dissolution into wholesale abstraction, takes a new approach in Dartmouth Spring #6. The leaves wiggle nervously towards the ground, which is another way of looking at them, and a blend of sky and architecture asserts itself from the distance in the form of whorls and dashes.

Ying spins 180 degrees to see a construction site, every bit as full of artistic potential.

The scene is Ying’s studio at Haverford College, where she has hung the expansive walls floor-to-ceiling with work. It is recent work, the last three years at most. And the paintings are thick. Oils are applied in layers as voluminous and delicious as cake frosting. The studio easel is disappearing under prismatic barnacles. The palette is as craggy as Shen Zhou’s cliffs. Ying’s studio practice, a fire-fueled manufacturing operation, has been temporarily suspended for the sake of a photographer who is coming to document the work.

This is, in fact, one of three studios. Another is a room in her house on campus at Haverford, and a third is in a modest apartment building on 28th Street in Manhattan, a few blocks from where she lives when she isn’t required to be in Pennsylvania. In addition her career includes a long list of residencies: Vermont, Maine, Newfoundland, New Hampshire, Maryland, upstate New York, Spain. Next year, Switzerland.

Ying has arranged her life so that painting need never stop.

It will be all the way, or not at all. This is the drive that gets you from painting portraits of Chairman Mao on a forced-labor farm to doting on Leland Bell’s tuition at Parsons, learning English and picking up modernist painting chops along the way. This determination drives her paintings to ever-greater thicknesses, because the previous strata were intuited to be insufficient.

The scene is a view of a tree in Pennsylvania, not unlike Wallace Stevens’ jar in Tennessee that made the slovenly wilderness surround it. 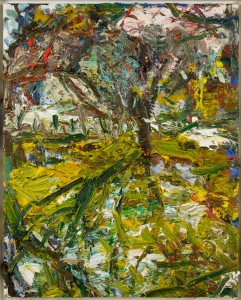 Winter is coming. In First Snow, Wyoming Street, the grass is defiantly green against patches of white. Final vermillion leaves cling to otherwise bare branches. Viscous paint swirls in new directions over every inch of canvas, making the atmosphere crackle. This crackling is the cold.

Winter is leaving. In Melting, a rosy blush appears in a sky that for now remains one with a ground of white and gray. Here and there a chilly green pushes through, swept along with drifts of silver. The tree appears as brown ruptures in the canvas. A fat blue brushstroke along the left edge appears as a welcome if slight barrier against barely relieved frigidity.

Summer is here. In Thick Summer, heaps of chartreuse grass pile up between us and the tree. The vermillion clinging to it now is heat reflecting off of chocolate-colored bark. The sky is as thick as the ground, thick with blueness, thick with storms. Turquoise and violet shadows rake over the field, cast by the tree’s neighbors. Sky, tree, field, and shadows are all ready to pour.

Summer is gone. In Leaf Walk, Red, the ground is blanketed in fall color, tomato-scarlet. Half of it remains in the tree. It is a note of honest witness, to paint a tree with leaves intact on one side and dropped on the other. It is not typically picturesque, but the fact is that the windward side goes first, and the artist has portrayed it as such. The sky is buildings coming into view, now that the verdant canopy is gone, or perhaps trees on a different path to winter, their leaves turning the color of straw. The blues and greens of summer are being pushed to the edges of the picture.

Stevens again: “I do not know which to prefer, / The beauty of inflections / Or the beauty of innuendoes, / The blackbird whistling / Or just after.”3

The scene is a meadow adjoining a forest in the French countryside in the early 18th century in which shepherds socialize and dance. But it’s a fictional scene, invented by Watteau. The landscape composes itself to suit the figures, who are dressed in silks too fine for the tending of sheep, ample skirts and feathered caps. This is a place I call The Country of Art. “The air one sees in the paintings of the masters is not the air one breathes,” said Degas.4 No man ever breathed the air of that country, except with his heart.

Ying is attempting to gain access to this wonderful place through the medium of monotype. The method is simple, and would likely offend a printmaking purist, but Ying has no time for such purity. Her temperament is one of urgent making. She coats a piece of cardboard with acrylic polymer. This is her plate, upon which she interprets Watteau’s The Shepherds (ca. 1717) in oils diluted with painting medium. Once printed, Ying’s vigorous marks spring off untouched white paper with particular luminosity. Like a jazz riff on a classical theme, the notes that make the Watteau so charming reappear in the print in a new form. The central couple is there, with his curling arm and her golden skirt. You can see the girl on the swing, if only as a distant memory. Each is now in the form of a stroke, or a bundle thereof, and it’s all in reverse, but it’s there. 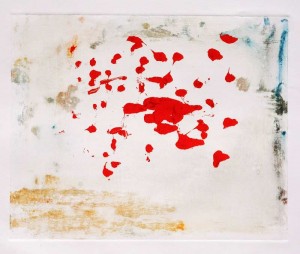 For all of Ying’s work with the landscape, she seldom includes figures, so Watteau, whose landscapes seldom lack them, is an intriguing choice of study. His Iris (The Dance), The Enchanter, The Foursome, French Comedians, and The Adventuress get the same treatment as The Shepherds. Ying preserves and reworks some serendipitous ghosting on the plate for Watteau’s Red #1 and #2, distilling the master’s smoldering warmth as abstractions.

Why do this? Because as you grow older and gain mastery, you lose living teachers and acquire deceased ones. Though the artists are dead, their works live on, sometimes for centuries, and this is the last mystery to solve: how do they do that? By dint of probing for years, trying this and that, working without relent, clues appear. One day a door opens to the Country of Art. Watteau’s meadow lies before you. In the distance stand Shen Zhou’s cliffs. Further on is Turner’s churning sea, Corot’s Italian pastures, the fruit trees of Indian miniatures, Mont Sainte-Victoire as it appeared only to Cézanne. A landscape of feeling rolls toward an endless horizon. You go through that door and never return.

1 A contemporary art event that takes place in Germany every five years.
2 What is Art?, 1896. “If only the spectators or auditors are infected by the feelings which the author has felt, it is art.”
3 “Thirteen Ways of Looking at a Blackbird,” Harmonium, 1917.
4 Ambrose Vollard, Degas: An Intimate Portrait, 1927.