In the Dufala Brothers’ satirical send-up of that toxic apocalypse otherwise known as the fully-commodified world, something truly death-defying is going on. It takes a superhuman glee to believe, as these works seem to, that on the back of beauty alone we might find a way to enjoy, even for a moment, this catastrophic immersion in garbage, terror, and senseless overproduction that is the status quo. 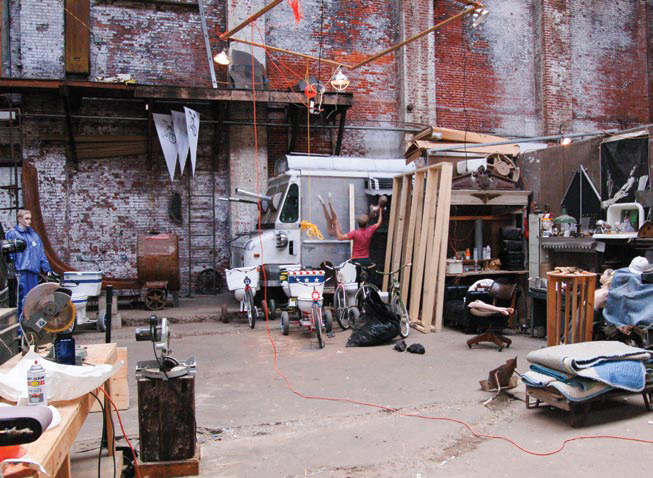 Here is a chance to see the sexy side of useless, a gorgeous angle on trash. And unlike everywhere else, we don’t have to choose, buy, or sell. We only have to look, and get yards and yards of sneaker canvas, metric tons of shiny metal spelling out words we love to hear, and an ice cream attack truck for weekend getaways. Of course the shit seeps out the cracks, overflows the toilets, and the La-Z-Boy floats on the recycling. Which is maybe why we’ve heard that such glitz is the just gilding of oppression or that style is the alibi of greed.

…there is no other aesthetic problem than that of the insertion of art into everyday life. The more our daily life appears standardized, stereotyped, and subject to an accelerated reproduction of objects of consumption, the more art must be injected into it in order to extract from it that little difference which plays simultaneously between other levels of repetition, and even in order to make the two extremes resonate—namely the habitual series of consumption and the instinctual series of destruction and death… [art] aesthetically reproduces the illusions and mystifications which make up the real essence of this civilization. (Difference and Repetition, Trans. Paul Patton, New York: Columbia U. Press, 1994, p. 293) 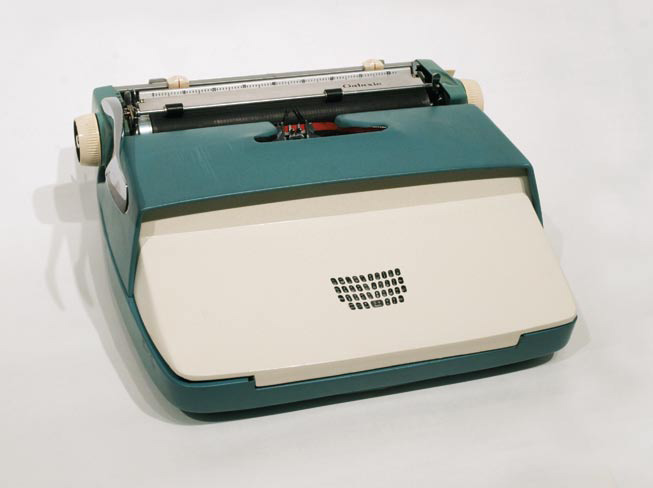 Deleuze was thinking about the “little difference” Warhol made in the standards and stereotypes of a totally reproducible world. For Deleuze, Warhol drew out something that was not there before in the images we thought we knew. He showed us something in the image we could not see until it went all blurry, smudged and smeared. In those incandescent, evanescent repetitions, Elvis suddenly gets uncanny, and other well-known faces and tired out places scintillate with an aura not their own. It’s not the glamour, but the grit and grief of the process that makes it beautiful. Warhol’s is the magic of tautology: where we thought there was only a star, prefabricated, there really is a star: Warhol’s own half-mocking, half-loving reproductions. This is the “little difference” Deleuze was seeing in repetition, images between images, a fleeting moment where we sense the presence of a beauty not outside this world, but one being missed in the routines of consumption and death.

In Deleuze’s mind it was crucial that Warhol not retreat from but stay within the signs of the times, working with its monstrous monotony. Deleuze thought that only there, in the heart of the machine, could we generate the most crucial difference, like a flash of light leaping between the two black series of habitual consumption and predictable destruction.

Maybe because the situation has worsened, on all fronts, from economics to ecologics, we now need more than light and color, and more than two dimensions, and even need exhibitions that spill outside the gallery walls, to get the point. Taking that minute to breathe offered by the Brothers’ remix of our Great Big Mess, it occurs to us to wonder, what’s the rush of the toxic apocalypse? Are we still on the old alchemical dream, to find out how much dross we can transform in the magnum opus, and if we can finally turn all this shit into gold? Does it all cut back to Luther on the crapper, composing his manifesto for children of God who no longer need God’s good earth? Luther gave up on unctions and on the idea of salvation through good works. But thanks in part to this Protestant Spirit, we’ve now given up on the earth for the commodity. Maybe we’re just like Luther, and just want to hurl our shit at Satan. Or maybe what we really want is to beat him in a toilet tricycle race.

Our endgame seems to be that if we can’t out-destroy the devil, we’ll out-consume him. Death by consumption, OUR waste, our TROPHY! But consumption is production: what we make is waste. And the devil will get his doo doo: having tricked Luther into hating the present world for the sake of the world to come, Ol’ Saint Nick has tricked us into hating last years’ model for the sake of the gizmo to come. But you have been warned by the Brothers Dufala: get more out of this trash while you still can. There is no escape from this beautiful place.