The cover of the tenth and final issue of Black Mask’s eponymous broadside features an arresting juxtaposition of image and text. The broadsheet is split vertically down the middle, so the wide block letters of the masthead “BLACK” “MASK” serve as two halves of a divided whole. The “BLACK” side of the sheet presents a treatise hailing the radicality of Berlin Dada against the bourgeois iterations of the Zurich and Paris sectors of the movement. The “MASK” side, meanwhile, presents a letter from the imprisoned black militant leader H. Rap Brown, Minister of Justice for the Black Panther Party and a chairman of SNCC (Student Non-Violent Coordinating Committee). Famous by 1968 for his anti-pacifism and an important figure in the transition from the largely non-violent strategies of the Civil Rights Movement to the direct action tactics of Black Power, Brown represented an extreme political vanguardism that paralleled Berlin Dada’s historical commitment to the total destruction of culture. The inassimilable quality of Brown’s call to move from “resistance to aggression … from revolt to revolution”1 reflects the violence inherent to the avant-gardist dream of Berlin Dada—the violation of that omnipresent division between art and life.

The dialectic is apparent, yet the illustration chosen to accompany Brown’s prison letter adds another layer to the composition. Hovering above Brown’s address is a reproduction of British sculptor Henry Moore’s The Helmet (1939). Produced during Moore’s Surrealist period, The Helmet evokes at once a pre-industrial and machine-age aesthetic. Moore’s lead armored shell encloses a sinewy figure within its foreboding exterior. The theme of the helmet sutures the iconography of industrial warfare to Greek antiquity, to the organic forms of African and pre-Columbian sculpture appropriated in primitivist strains of early Surrealism. Moreover, The Helmet’s appearance above the Third-Worldist slogan, “Lasime Tushinde Mbilashaka” (We shall conquer without a doubt),2 reinforces the primitivist connotation. However, the formal aspects of the sculpture—its structure as a form inside another form, a figure within a head, an organic being inside an inorganic enclosure—also literalizes a depth model of consciousness, wherein the inner self appears as a dynamic being trapped inside the mechanization of the helmet-head. 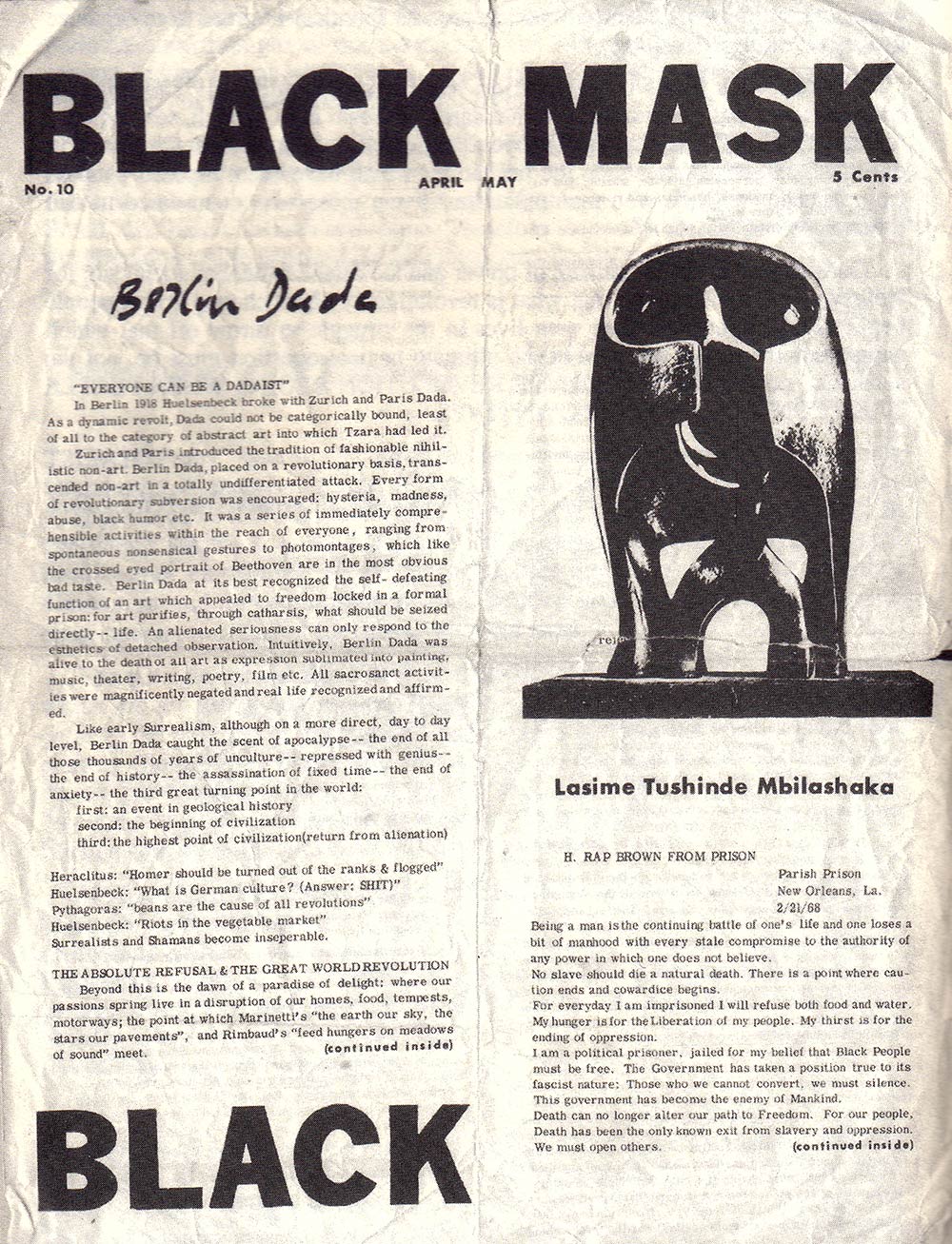 If on the left hand side of Black Mask 10 we are told, “EVERYONE CAN BE A DADAIST,”3 and on the right we are presented with an incitement to anti-racist struggle, what might one make of Moore’s The Helmet as the mediating factor between the two? Alongside Brown’s descriptions of black struggle, The Helmet could be seen as a visual metaphor for the kind of double-consciousness inscribed in the experience of racism that Frantz Fanon called “epidermalization.” Epidermalization refers to the contingent process through which the colonial subject internalizes the objectifying structures of racism. In Fanon’s phenomenology, the psycho-social condition of epidermalization arises from the racialized subject’s experience within a visual field of social relations. Given the influence of Fanon’s thought on the Black Mask group—whose own name was inspired by an inversion of Fanon’s seminal Black Skins White Masks—the representational violence of racialized being was at least implicit in the group’s critique at both a visual and textual level. The juxtaposition tells us that everyone may not in fact be a Dadaist—that to be a Dadaist in 1968 required one to embrace a militant practice of decolonization, a struggle that might only be waged at the level of the aesthetic and the political, the visual and the haptic, the representational and the real, simultaneously.

A similar dialectical composition appears in each of Black Mask’s ten issues. In the sixth issue, the “kleftic poetry” of Byron and Shelley are discussed alongside an appeal for James Baldwin’s petition in defense of the Harlem Six.4 In the second issue, an account of the anarchistic basis of New York’s Resurgence Youth Movement is placed above an excerpt from Laszlo Moholy-Nagy’s “Vision in Motion” (1947).5 As an anarchist collective active in New York City between 1965 and 1968, Black Mask was engaged in a number of other practices beyond the production of this broadside including numerous protests against the art world, such as sending local homeless neighbors to an uptown gallery opening, shooting the New York School poet Kenneth Koch with a round of blanks, and various actions against museums.

Despite these attacks on the art institution, Black Mask’s members were also involved in New York’s nascent expanded cinema and underground film and theatre scenes of the mid-1960s, through their collaborations with the Italian-American multimedia artist Aldo Tambellini. The juxtapositions found in their broadside reflect the practices of Black Mask as a group equally engaged with the political questions raised by anarchist activism and an increasingly radicalized Black Liberation movement as they were with the theoretical questions imbricated in these (mostly kinetic and multimedia) art practices of the mid-1960s. For example, Black Mask’s collaborations with Tambellini on a series of “electromedia” performances followed up on the kinds of perceptual questions raised by Moholy-Nagy reprinted in their broadside. Yet those perceptual questions—as we can glean from the visual metaphor of Moore’s The Helmet alongside the incitements of H. Rap Brown and Richard Huelsenbeck—were entangled in the problem of representational thinking inherent to structures of racism.

Members of Black Mask, however, widely acknowledge that they stopped making artwork once the group gained momentum. For them, art’s ability to support contemporaneous political struggles had to move beyond the mere representation of oppression. As Berlin Dada’s Richard Huelsenbeck (by then a practicing psychoanalyst in New York, who carried on a dialogue with Black Mask’s Ben Morea) claimed, “Dada ist eine Geistesart,”6 or a “state of mind.” By 1968, for these neo-Dadaists, art’s criticality depended upon its ability to supersede its categorically self-contained separate status in the now. Ceasing the production of Black Mask in May 1968, the activists explained that they had “transcended” the formation of Black Mask as an object that existed outside the real, as mere representation. Their explanatory letter read, “The reason is the direct result of our theory – The movement must be real or it will not be. Now the call is INTO THE STREETS.”7 The departure from broadside-production was thus conceptualized as a kind of lived critique of representation.

This representational eclipse put into practice the ideas printed in the last issue of Black Mask, not only from the juxtapositions on the final cover, but also through the critiques presented in the final two written pieces of the issue. These two tracts, “Revolution as Being” and “The Theory of Synthesis and the Synthesis of Theory,” argued for the inseparability of any kind of revolutionary practice or thought from embodied experience.8 Attributed to “JPM,” “Revolution as Being” drew attention to the word “Re-vo-lu-tion” as a floating signifier whose referent had yet to be established.9 The authors accuse “the movements which proclaim as their goal revolution” of only pronouncing “the syllables re-vo-lu-tion.” Noting that the referents to which the word “revolution” corresponds remain multiple and dynamic, the tract indicts those who do little beyond uttering “a mere word.” The text’s accusations, however, move well beyond the written word to require the destruction of normative modes of behavior, thought, and representation: “to think on Being and to Be revolutionary is to undertake to destroy a great deal of ourselves in the process. There is no distinction between the subjective and the objective in the revolutionary act. Being must everywhere be the basis of our deed.” Invoking the anarchist notion of a means and ends imminent to one another in “the deed,” the first step in this revolution would be, in Kobena Mercer’s words, “to decolonize inherited models of subjectivity.”10

At the time of this tract’s writing, the city was undergoing a lengthy sanitation union strike, leaving the urban landscape in a state of literal decomposition— a condition that would inspire Black Mask’s infamous action against Lincoln Center for which they hurled garbage at the building’s decorative fountain. “Revolution as Being” thus ended by acknowledging that “the garbage heap affectionately called America by some, is disintegrating into its component piles of crap; it is a profound metaphor that the garbage workers refuse to collect the shit… . Being has begun to leave traces of its existence: strikes are now transcending their ostensible demands.”11 Printed in Black Mask’s final issue, “Revolution as Being” signals the beginning of a program which could not be contained by explicit demands upon a system whose representational apparatuses already reinforced a banalization of social relations. The space of “Being” would be found in the garbage-strewn streets of an urban environment reaching, it seemed to them, a point of crisis.

The closing treatise of Black Mask also demanded a kind of struggle that would inevitably exceed the confines of the page. “The Synthesis of Theory and the Theory of Synthesis,” written by Black Mask’s more “mystical” anarchist Alan Hoffman, announced: “We are thru being assimilated: we will no longer make objects/our Art is life/our medium revolution/& in a world based on repression our only message is Liberation.”12 (Lines such as these enraged the Parisian Situationists who delivered venomous letters to the group railing against the anti-theoretical “pure activism” of Morea and Hoffman.) For Hoffman, the synthesis of theory with lived experience required not only the dismissal of the art object, but the rejection of whiteness. In the very same tract, Hoffman abandons the term “white” in favor of “light” as a descriptor for white activists in support of armed black militancy. While the complexity of white radical appropriation of black struggle in the 1960s is beyond the scope of this brief discussion, it is worth noting the language by which Hoffman articulates the need for “emerging revolutionary Lights” to “destroy the state” and the art object at once. It is a mistake to take “anarchist diatribes against the state as the foundation for its critique of representation,” as Todd May has pointed out, since “the state is the object of critique because it is the ultimate form of political representation, not because it is founding for it.”13 One of the foundational aspects of such a critique is the power embedded in the conditions of legibility within society at a given moment—conditions revealed as untenable by the radicalization of third-worldist and anti-colonial struggles in the 1960s. Such struggles would make the problem of being positioned in and by representational thinking increasingly urgent in this moment.

Black Mask 10 was the last time the aesthetics and politics of the group would be articulated in a form prior to embodied praxis. To turn, in closing, back to Moore’s The Helmet, we may now perceive its significance as the illustration for Black Mask’s final issue. Black Mask’s Ben Morea, who designed the layout for every cover, explained that he chose the sculpture despite his own lack of enthusiasm for Moore as an artist. He “liked the pre-civilizational feeling” of the piece but felt it was “postindustrial … at the same time.”14 As, partially, a remnant of Surrealist Primitivism, the sculpture is suggestive of the surrealist desire to find meaning in a pre-cognitive or sub-rational arena of experience. This was the type of experience that Black Mask, by the middle of 1968, imagined as arising from within action itself. One senses how the “synthesis of theory and the theory of synthesis” might only occur in the destruction of the very apparatus that had allowed the group to circulate its ideas. The dismantling of their own broadside was a quintessentially anarchistic anti-art move: It posed praxis as a prefigurative moment through which new forms and experiences might emerge in “the shell of the old.”15 Historically, the anarchist tradition has envisioned theory as something that emerges from practice—an idea whose roots can be found in the strategies of mutual aid and direct action, rather than a pre-given set of principles. Black Mask’s turn to “the real” follows in this tradition, which, as Pierre-Joseph Proudhon once remarked, holds forth from within the “fecundity of the unexpected.”16