The Wall in Our Heads: American Artists and the Berlin Wall commemorates the twenty-fifth anniversary of the reunification of Germany and reflects on legacies of division in American culture. The exhibition features critical American artistic perspectives of the Berlin Wall from 1961 through the present, including artworks that confront social boundaries in the United States as well as the complex historical crossroads of Berlin.

The Wall in Our Heads is curated by Paul M. Farber, Postdoctoral Writing Fellow, Haverford College.

During the Cold War, the Berlin Wall was the world’s most notorious line of demarcation. From 1961 to 1989, the fortified border not only separated East and West Berlin, but it also surrounded the western allied zones, including the American sector. Divided Berlin became a global epicenter of ideological conflict, military occupation, and artistic expression. Hundreds of American artists visited Berlin and produced work on both sides of the Wall. Even in the shadows of its stark boundaries, the city served as a conduit for cultural exchange, especially for Americans who approached the Wall to understand its division as both a physical and a social construction.

Cold War Berlin emerged as a popular option for Americans seeking critical distance—an alternative space analogous to postwar Paris or the mythic “open road” of the American interstate highway system. Berlin, beyond other cities occupied by the Cold War cultural imagination and American military forces alike, brought into sharp focus the crises of democracy in the United States and beyond. Artists and cultural producers turned to Berlin’s division to reflect on matters of race, gender, sexuality, class, and national belonging, whether they viewed the Wall from East or West. Such visiting artists also moved beyond the Wall itself, pursuing projects with German colleagues that led them to engage with Jewish trauma, racial identification, radical political communities, diasporic and immigrant identities, queer culture, and other social formations in Berlin.

Despite the dismantling of the Berlin Wall in 1989, historical memory of this divide continues to generate layered perspectives on freedom and repression today. Contemporary artists consider the afterlife of the Wall with critical and creative eyes, producing projects that consider its monumental ruins and other “new walls” around the world. These projects complicate the popular treatment of the material remains of the Wall, which are frequently presented as self-evident historical relics and highly priced art objects. Whether based in Berlin or elsewhere, these artists working in a variety of media have crafted imagined “wall pieces” that refer to or refashion border fragments as vehicles for critical thought. Whether through documentation or performance, relic or replica, remix or ruin, their works continue to draw us closer to the Berlin Wall.

The Wall in Our Heads: American Artists and the Berlin Wall was commissioned and first shown at the Goethe-Institut Washington, October 15-December 15, 2014. 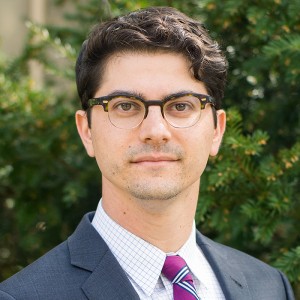 Paul M. Farber is a scholar of American and Urban Studies. He is currently a Postdoctoral Writing Fellow at Haverford College. Farber received a PhD in American Culture from the University of Michigan. He previously served as a Doctoral Fellow at the German Historical Institute in Washington, D.C.

Farber’s research focuses on urban history, cultural memory, and creative approaches to civic engagement. His current book project is a study of representations of the Berlin Wall in American art, literature, and popular culture from 1961 to the present. He traces the multifaceted story of how the Berlin Wall emerged as an integral part of the cultural imagination in the United States during the Cold War, especially related to matters of race, gender, sexuality, and national belonging.

Farber has recently published essays in several edited collections including Shinkichi Tajiri: Universal Paradoxes (Leiden University Press, 2015), Audre Lorde’s Transnational Legacies (University of Massachusetts Press, 2015), and In Media Res: Race, Identity & Pop Culture in the 21st Century (Bucknell University Press, 2014). He is also the editor of a new critical edition of photographer Leonard Freed’s Made in Germany (Steidl Verlag, 2013), and the co-editor of a special issue of the journal Criticism on HBO’s series, The Wire (2010). His work on culture has previously appeared in the Guardian, Museums & Social Issues, Vibe, and on NPR.

In addition to curating The Wall in Our Heads: American Artists and the Berlin Wall, Farber is a founding curator of the public art and history project, Monument Lab: Creative Speculations for Philadelphia. He also currently serves as the inaugural Scholar in Residence for the City of Philadelphia Mural Arts Program.

Part of the John B. Hurford ’60 Center for the Arts and Humanities, the Cantor Fitzgerald Gallery aims to extend cultural literacy through the display and analysis of work across visual and material media. Envisioning exhibition spaces as active workshops for the exploration of visual culture, the Exhibitions Program partners with faculty, students, and visiting curators to design exhibitions that connect curricular interests and scholarship with contemporary artistic practice. Hours: Monday through Friday 11 a.m. to 5 p.m., Saturdays and Sundays 12 p.m. to 5 p.m., and Wednesdays until 8 p.m.