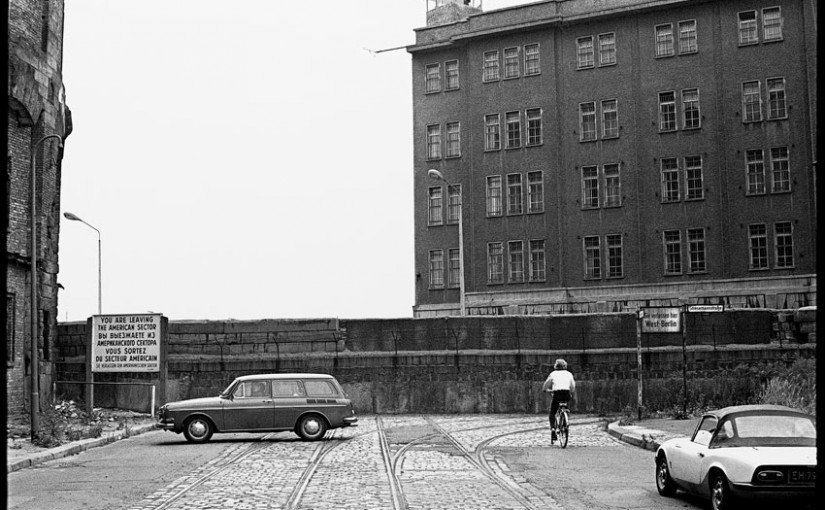 Postdoctoral Writing Fellow at Haverford College and curator, The Wall in Our Heads

During the Cold War, the Berlin Wall was the world’s most notorious line of demarcation. From 1961 to 1989, the fortified border not only separated East and West Berlin, but also surrounded the western allied zones, including the American sector. Divided Berlin became a global epicenter of ideological conflict, military occupation, and artistic expression. For decades, hundreds of American artists visited Berlin and produced work on both sides of the Wall, many compelled by the dialectic of freedom and repression that characterized the city’s charged history. Even in the shadows of its stark boundaries, the city served as a conduit for cultural exchange, especially for Americans who approached the Wall to understand its division as both a physical and a social construction.

Berlin was such a generative space for cultural exchange, in part, because of the larger political currents that spurred the city’s division following the end of World War II. In the wake of Nazi Germany’s defeat and the halt of Hitler’s imperial and genocidal conquests in 1945, the allied powers divided the German state, and its capital Berlin, into four controlled zones of influence—governed by the United States, France, Britain, and the Soviet Union (U.S.S.R.), respectively. Designed both to punish the country and to guarantee its peaceful reconstruction, this complicated division was soon reduced to a now familiar binary. By 1949, due to simmering tensions between the superpowers, the American-led allied western powers merged their territories and situated themselves against a Soviet-sanctioned east. Relations between the western Federal Republic of Germany and the eastern German Democratic Republic became crucial points of Cold War antagonism, sometimes epitomizing and other times challenging the rift between East and West, with loosely organized and largely symbolic borders.

When East German forces began constructing a formidable, formal system of division in August 1961 to encircle West Berlin, the structure emerged as a tangible barrier in a conflict of ideologies. This fault line was located within a city that also evoked deep transnational relationships, including complex negotiations of U.S. power and presence abroad. Both American and German scholars have turned to this site of attachment and interaction to better understand postwar political history. Andreas Daum maps “America’s Berlin” as “a political and symbolic place embedded in historical myths and articulating political visions that incorporated Berlin into the history of the United States.” 1  Maria Höhn and Martin Klimke also trace the “contradictions” of U.S. postwar democracy through the “entanglements and shared destinies” with both East and West Germany. 2  These scholars and others look to the ways transnational diplomacy, militarism, and cultural work helped shape the geopolitical landscape of Cold War Berlin.

Among the Wall’s first American observers, photojournalist Leonard Freed sought out the complexities of Cold War culture and history. While working on a book related to Jewish memory in post-Holocaust Germany, Freed arrived in Berlin in late August 1961, just days after the Wall’s construction. However, Freed’s fleeting encounter with an African-American soldier guarding the newly erected Wall inspired another ambitious project: making sense of racial segregation back home. Freed later noted in the opening to his classic phototext Black in White America (1968),

We, he and I, two Americans. We meet silently and part silently. Between us, impregnable and as deadly as the wall behind him, is another wall. It is there on the trolley tracks, it crawls along the cobble stones, across frontiers and oceans, reaching back home, back into our lives and deep into our hearts: dividing us, wherever we meet. I am White and he is Black. 3

Freed’s reflection affirmed the layered nature of this meeting—U.S. citizens stood feet away from one another in an American-occupied zone of a foreign nation, still divided by a deep history of racial strife. Later, other artists—including Shinkichi Tajiri, Allan Kaprow, Lawrence Weiner, Jonathan Borofsky, Nan Goldin, Allen Frame, Keith Haring, Oliver Harrington, Alexandra Avakian, and dozens more—similarly routed their own travels and artistic works through the geopolitical crossroads of walled Berlin, pivoting their work between the U.S. and the two Germanys, to make sense of historical and cultural divides.

Cold War Berlin emerged as a popular option for Americans seeking critical distance—an alternative space analogous to postwar Paris or the mythic “open road” of the American interstate highway system. Berlin, beyond other cities occupied by the Cold War cultural imagination and American military forces alike, brought into sharp focus the crises of democracy in the United States and beyond. To identify or be adopted as an “American Berliner” was to conjure the symbolic links between American and German politics, akin to President John F. Kennedy’s proclamation of symbolic citizenship (“Ich Bin ein Berliner”). But such an identification was also a call to embrace a city through its traumas and haunts. Whether American Berliners traveled to the divided city on state-sponsored official visits, earned subsidized fellowships from the German Academic Exchange Service (or DAAD), taught in German universities, showed their work in burgeoning cultural venues, or sought exile and reprieve independently on one side of the Wall or the other, collectively, they comprise a cultural movement. Thus, for the duration of its existence, the Berlin Wall was a site of pilgrimage for American cultural producers who sought out the city in order to negotiate their own complex American identities.

Such individuals were not content to tour the Wall as a spectacle and then retreat; rather they often revisited it over the course of many years to explore closely the relationship between this site of division and American Cold War politics. Artists and cultural producers turned to Berlin’s division to reflect on matters of race, gender, sexuality, class, and national belonging, whether they viewed the Wall from East or West. Such visiting artists also moved beyond the Wall itself, pursuing projects with German colleagues that led them to engage with Jewish trauma, racial identification, radical political communities, diasporic and immigrant identities, queer culture, and other social formations in Berlin. In sum, such journeys to the Berlin Wall presented visitors with a parallel vision, a complex architectural doppelgänger that beckoned them to meditate on the legacies of U.S.-sponsored segregation and marginalization.

Whether they stayed in the city for a matter of days or in long-term residence, American Berliners continued to ask: What was the relationship between freedom and repression in a post-Nazi world? What was the nature of America’s self-imposed role as guarantors of global freedom? What and where were the contradictions of such a global project? The Berlin Wall and the landscape of the divided city brought visiting Americans face-to-face with opportunities to consider these questions. Together, they aspired to a collective choreography: Each individual visited Berlin and encountered the Wall or other facets of a divided Germany on their own, and then represented their experiences within a piece of art or long-term creative project. This cohort of politically conscious cultural producers made pilgrimages to divided Berlin as a way to better understand the contours and limits of their own cultures. They were habitually drawn to make sense of Berlin’s traumatized past, its militarized present, and the notion that freedom and constraint operated as twin forces within its fortified city limits.

Despite the dismantling of the Berlin Wall in 1989, historical memory of this divide continues to generate layered perspectives on freedom and repression, well into the present. Contemporary artists consider the afterlife of the Wall with critical and creative eyes, producing projects that consider its monumental ruins and other new walls around the world. These projects complicate the popular treatment of the material remains of the Wall, which are frequently presented as self-evident historical relics and highly priced art objects. Whether based in Berlin or elsewhere, these artists working in a variety of media have crafted imagined “Wall pieces” that refer to or refashion border fragments as vehicles for critical thought. Adrian Piper, an expatriate who relocated to Berlin after a storied career as a conceptual artist and philosopher in the United States, positions a work in her Everything series (2003-ongoing) to present loss as a feature of a post-Wende American political status quo.

“[The] Everything series evolved from my need to cope with the loss of my illusions about the United States… Since I’ve been living in Berlin, the meaning of the work changed… I perceive a population characterized by the removal of barriers and how it has constituted itself anew: the fall of the Berlin Wall; the slow dissolution of a facade of normality.” 4

By continuing to summon the history and memory of the Berlin Wall, these American artists join others from a generation prior, and colleagues from Germany and around the world, to pose an essential question of our political moment: How do we transform our legacies of division? Their ever-growing archive of cultural works representing the Berlin Wall may serve to remind us that the impact of the Cold War, and the divides endemic to American culture, are in need of further critical exploration. They also spurn simple narratives of resolution or triumph to remind us of our own unfinished democratic project. Whether through documentation or performance, relic or replica, remix or ruin, their works continue to draw us closer to the Berlin Wall, and in turn, demonstrate how geopolitics can be just as fanciful, poetic, absurd, and urgent as art. They remind us that many artists painted on the Wall not to cover it up, but to make it stand out.