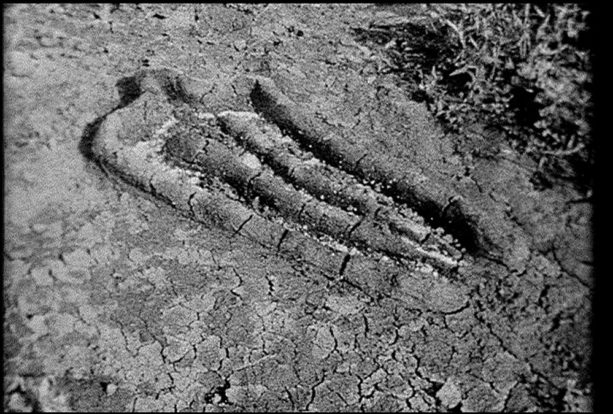 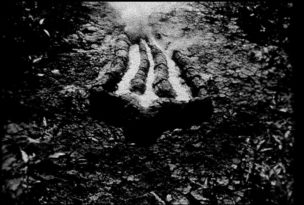 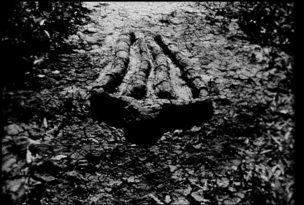 Following her first visit in 1971, Ana Mendieta traveled to Mexico every summer between 1973 and 1980. This timeframe coincides with her Silueta series: hybrid performance/constructions in which she would inscribe the silhouette of her absent body into outdoor sites, often making use of ephemerally destructive materials like gunpowder or fireworks. These “earth-body” sculptures were private affairs, made public at the brief moment of their creation to a few select collaborators. Only later were they exhibited more broadly via her methodically planned film and photographic documentation. Made in sites with either personal resonance or cultural significance—Zapotec graves and 16th-century Dominican church complexes in Mexico, for example—Mendieta’s incised traces were often unmarked and left to deteriorate into the earth. And while frequently framed within a discourse of land art or earthworks, Mendieta explicitly rejected such affiliation in favor of her deeper identification with non-Western spiritualism and indigenous materiality. Her connection with Mexico derived from its complex transposition of pre-Colombian and colonialist cultures as well as its seemingly pervasive connection with death. In a 1978 artist statement, penned the year following her graduation from the innovative Intermedia arts program at the University of Iowa, she writes:

It is perhaps during my childhood in Cuba that I first became fascinated by primitive art and cultures. It seems as if these cultures are provided with an inner knowledge, a closeness to natural resources. And it is this knowledge which gives reality to the images they have created. It is this sense of magic, knowledge, and power, found in primitive art, that has influenced my personal attitude toward art making…. Using my body as a reference in the creation of the works, I am able to transcend myself in a voluntary submersion and a total identification with nature.

Two video works from Mendieta’s Silueta series are shown here. The first, Untitled (Gunpowder Silueta Series), is a black-and-white film shot on Super-8mm in Iowa in 1981. A sequence of jump cuts reveals multiple angles of scorched earth, marking a significant departure in documentation from the framing of her earlier works in which a single perspective holds the film’s entire duration. The site of this performance held personal significance. At the age of twelve, Mendieta and her fourteen-year-old sister were sent to the United States by her parents because of political anxiety and fear of retribution (her father was imprisoned in Cuba for eighteen years). The two sisters spent their first years as refugees in institutions and foster homes across Iowa before their parents were able to join them. In interviews and published texts Mendieta often describes her practice in relation to this early experience of displacement and exile: “To inscribe my silhouette into nature maintains (or establishes) the transition between my country of origin and my new home. It is a way of reclaiming my roots and joining myself with nature. Although the culture in which I live is part of me, my roots and my cultural identity are products of my Cuban inheritance.” The second work, Anima, Silueta de Cohetes (Firework Piece), was shot in 1976 in Oaxaca where Mendieta first traveled with fellow students from an Intermedia program in the summer of 1973. The Super-8mm color work shot from a single perspective shows fireworks highlighting the traced outline of her body suspended against a darkening sky.