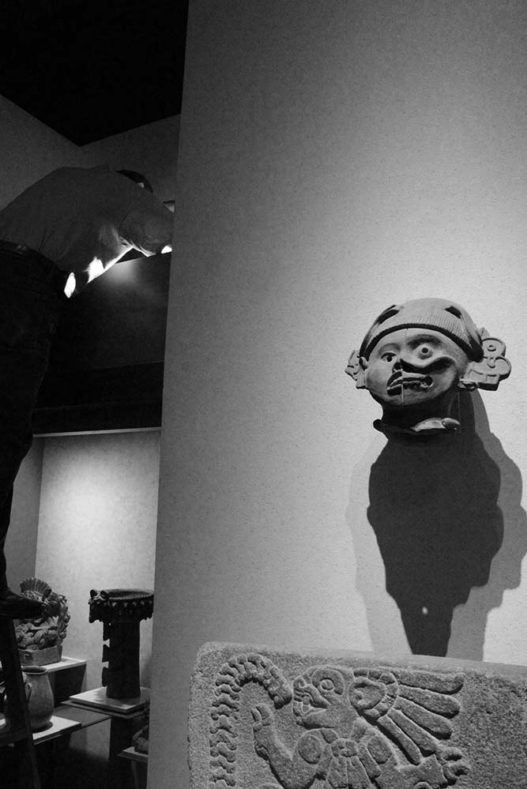 Arreglando los focos larga
from the series Notes on the Total Destruction of the National Museum of Anthropology, 2014–
Courtesy of Eduardo Abaroa 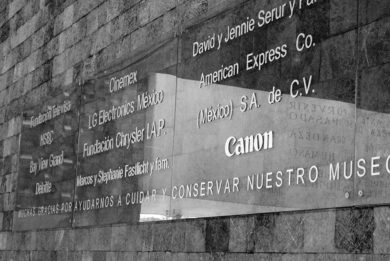 Porvenir, pasado, grandeza, humano
from the series Notes on the Total Destruction of the National Museum of Anthropology, 2014–
Courtesy of Eduardo Abaroa 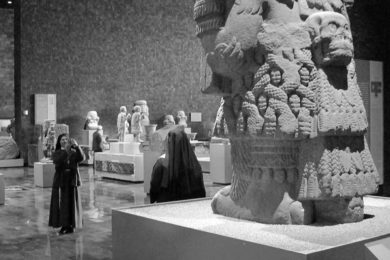 Falda de serpientes
from the series Notes on the Total Destruction of the National Museum of Anthropology, 2014–
Courtesy of Eduardo Abaroa 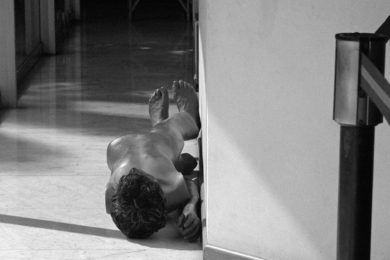 Maniquí escondido
from the series Notes on the Total Destruction of the National Museum of Anthropology, 2014–
Courtesy of Eduardo Abaroa 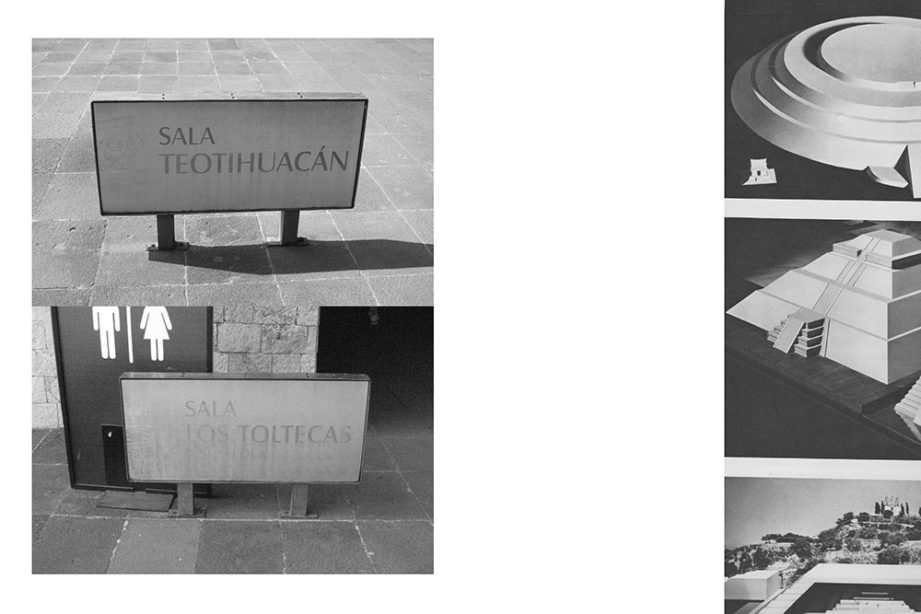 Letreros 2
from the series Notes on the Total Destruction of the National Museum of Anthropology, 2014–
Courtesy of Eduardo Abaroa

In 2012, Mexico’s Institutional Revolutionary Party (PRI) regained power with the election of President Enrique Pena Nieto. Previously dominating national politics from 1929 to 2000—in what was effectively a one-party dictatorship—the PRI’s platform emphasizes free enterprise and the facilitation of private investment in an open, market-oriented economy. This archetypal neo-liberal ideology is, in classic PRI rhetoric, camouflaged by overtly nationalist sentiment. One of the clearest examples of such operative strategy was the party’s inauguration of the National Museum of Anthropology in 1964. An initiative of then-President Adolfo López Mateo, the Anthropology Museum brought together archaeological artifacts from pre-Columbian civilizations with an overt focus on Aztec mythologies. The architect for the project was Pedro Ramírez Vázquez, who also designed some of Mexico’s most prominent icons of national and corporate power structures. In his admittedly problematic discussion of this cultural apparatus of state violence titled “Critique of the Pyramid” (1968), Octavio Paz connects such atavistic fetishization of repression with the singular power of a charismatic but ruthless leader of modernization in Mexico, specifically in the 1968 massacre of peaceful revolutionaries in the Plaza of the Three Cultures in Tlatelolco. Paz further describes the museum’s informational and physical architecture by saying that its “exaltation of the Aztec period confirms and justifies what in appearance condemns the museum: the survival, the continuing strength, of the Aztec model of domination in our contemporary history.”

This symbolic perpetuation of pyramidal hierarchies of power and authoritarianism, an apologia for institutionalized violence, forms the basis for artist Eduardo Abaroa’s ongoing critical project The Total Destruction of the National Museum of Anthropology. First presented in 2012 at Kurimanzutto Gallery in Mexico City, this evolving inquiry proposes the demolition of the museum and its contents: ethnographic collections of pre-Hispanic works, memorabilia, gift shop, dioramas, and towering Modernist architecture included. Far from a terrorist act, Abaroa’s proposal is methodical—illustrated via a series of architectural schemata and engineering notation. His project, he posits, is a rational response to the state’s cynical attempts to harness the symbolic power of indigenous communities and their pre-Hispanic artifacts while simultaneously destroying the rights, livelihood, and national environment of their direct descendants.

An emotionally urgent yet fantastically hypothetical proposal, The Total Destruction of the Anthropology Museum extends Abaroa’s fascination with impossible projects that contend with the equally absurdist strictures of Mexico’s nation-state. In 1991 Abaroa proposed a fake gold chain that would wrap the country’s geographic perimeter. To complete this project would have cost over six million US dollars, an astronomic price that becomes miniscule when compared to the accumulative costs of NAFTA legislation for Mexico’s working class. Abaroa’s critique of nationalist ideologies extends to the role of cultural monuments and other so-called sacred sites of twentieth-century mourning and spectacle. A photograph of a sign from 2000 announcing the architectural restoration of the museum’s gallery was signed by the same president who cancelled the San Andrés Accords (agreements reached between the Zapatista National Liberation Army and Mexico’s federal government), and images of idyllic farming dioramas are paired with a text on the rise of cancer rates in indigenous communities because of increasing amounts of Erionite used in freeway construction. Notes on the Destruction of the Anthropology Museum (2014)—a series of silk-screened prints with Abaroa’s gathered material presented in the style of Vázquez’s quasi-promotional book on the project published by Panorama Editorial in 1968—detail micro-narratives of architecture, pedagogy, spectatorship, signage, corporate sponsorship, health, degradation, repair, power, and spectacle that underscore Abaroa’s proposal for destruction.